Dopravní podnik (Prague’s public transit company) has opted to repair its fleet of more than 50 14T trams, first put into operation in 2006. The trams were side-lined after problems with the vehicles became apparent. Soon they should begin returning to daily rotation. 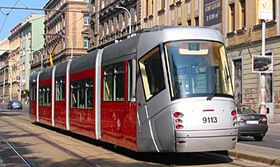 Škoda 14T, photo: Kristýna Maková According to news website lidovky.cz the firm is making use of mechanical engineering insurance, to begin repairing damaged chassis or undercarriages which suffered structural damage. At the same time, the transit company will improve the seating layout.

The 14T tram, produced by Plzeň’s Škoda Transportation is often referred to as the Porsche tram because the vehicle, including its front mask, was the designed by Porsche daughter company Porsche Design. Despite its pedigree, the 14Ts have never ranked as crowd favourites: many commuters found the interior, with its open seating crowded, inconvenient, and lacking privacy, a reputation the trams have never been able to shake off.

Worse, the trams suffered apparent cracks in parts of the undercarriage which prompted the transport company to side-line the fleet in Prague, leaving only two units running. The firm maintains the heavy trams were also ill-suited and damaging for some sections of track, a claim Škoda Transportation rejects. The result was that the trams, which originally cost around 58 million crowns each, were not being used.

According to lidovky.cz, at first the transit firm hoped to resell the vehicles to interested countries within the former Soviet bloc. But the firm changed tack and later opted to repair the trams instead: each vehicle will reportedly cost around 1.8 million crowns to fix. The news site writes that the first should roll out within a number of weeks. Two vehicles, it is estimated, could be fixed per month, with repairs being done in-house.

In terms of day-to-day use, Prague commuters will probably be more pleased that the transit company plans revamp the vehicles inside. Before, the 14T corridor was narrow and left users seated facing each other during travel, never pleasant, least of all during flu season. The revamped seating will echo parallel sections of the 13T which are used in Brno. That should provide a greater sense of privacy and comfort which was until now lacking.

Anyone who has ever taken a tram in the capital will know that one of the joys of above ground commuting, after all, is being able to look out the window at the changing scenery of one of the world’s most beautiful cities – not stare at other people reading, talking or checking their email. A representative of the firm told lidovky,cz that all of the uncomfortable face-to-face seating will systematically be replaced, suggesting that the “Porsche” tram will have a better chance of winning over users a second time around.

Veteran wooden Ostrava tram being spruced up for its centenary

Although many people today crave the latest technology, there is a persistent, strong fascination with “veterans” – old-timey cars, trams…

After an absence of nearly 40 years, trams are set to again run up and down Prague’s Wenceslas Square. The city council have just approved… 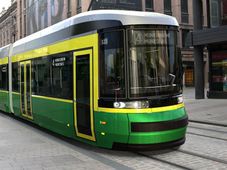