Prague City Hall councillors have voted to terminate a memorandum of cooperation with shared e-scooter operator Lime on the grounds that the company is not adhering to the agreed-on conditions. While the termination of the memorandum will not affect the rent of scooters in Prague’s streets, it is a warning to the company that City Hall is unhappy with the present state of affairs. 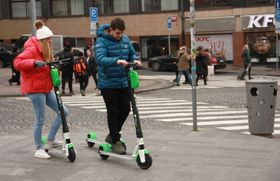 Photo: Barbora Němcová Lime put out 1,500 e-scooters on the streets of Prague in September of last year and the sharing service was a big hit with both young Czechs and tourists. However within a matter of weeks, the locals recognized the downside of the new phenomenon and have been bombarding the authorities with complaints regarding carelessly discarded scooters blocking pavements and pedestrians being put at risk by aggressive or drunk riders going past them at full speed.

The once popular Segways were banned from Prague’s city centre for the very same reason and City Hall’s decision to terminate the memorandum with Lime is a finger raised in warning following a number of futile attempts to address the problem and get the company to accept responsibility for the behaviour of its clients.

City Hall claims that the company is too lenient and has failed to adhere to the conditions stipulated in the memorandum, such as providing scooter-storage areas or speedily removing poorly-parked scooters from places around Prague. By terminating the memorandum, City Hall officials are opening the door to a new agreement in which cooperation would be governed by stricter rules.

According to a Czech Transport Ministry directive e-scooters, normal scooters or even bikes cannot be driven on sidewalks. However that is proving increasingly hard to enforce as the city centre is filling up with shared vehicles to rent. In addition to the Lime scooters and Skoda scooters the company Homeport is operating an e-bike sharing service. 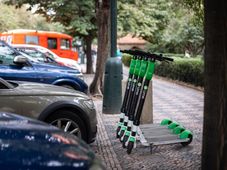 Following a pause brought about by the arrival of the coronavirus epidemic, the company Lime is reintroducing its distinctive green,…

The sharing of private homes in Prague via Airbnb and other accommodation platforms has become a regular business, suggests a new study…