On Wednesday, Parliament is expected to discuss a new legislation amendment, which intends to make it easier for district authorities to remove aging car wrecks abandoned in otherwise useful parking spaces. The Ministry of Transport has criticised the amendment, saying it is lacking in a number of areas, but said it is finalising its own legislation proposal. 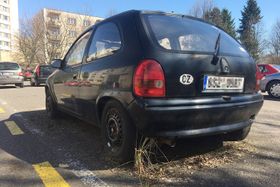 Photo: Josef Kopecký / Czech Radio Like any busy city, Prague’s car parking spaces are in high demand. Yet it is quite common to see abandoned, run-down vehicles standing on one spot for years. These run-down black passengers are not only an eye-sore for those browsing the historic capital’s streets, but for the city’s authorities, who are losing money on unused parking spaces, they are an unwelcome nuisance as well.

In Prague 10 for example, there are currently between 100 to 200 vehicles recorded as eligible for removal. The district’s spokesman, Vít Novák, told Czech Radio why the city is not doing so: “We have absolutely no problem paying for the liquidation of the wreck. It would add another parking spot. Financially, it is not an issue. The problem is in the legislation.”

The current law states that only vehicles with severe damage to their “mechanics or construction” classify as wrecks and can therefore be removed. This does not involve vehicles with flat tires or no number plates.

“You often get absurd situations, when for many months, even years, you have a car taking up a parking space while we are unable to even to find out who the owner is”, says the spokesman for Prague 6, Ondřej Šrámek.

Prague 10 spokesman, Vít Novák, says that if legislation were improved up to three quarters of the district’s wrecks could be cleared. Other parts of the capital face the same problem, with dozens of discarded vehicles lining the streets of Prague 4 and Prague 9. The historic centre is also affected by the issue, albeit it seems to a lesser degree.

Markéta Pekarová Adamová, MP and First Vice-Chairwoman of TOP09, one of the smaller centre-right opposition parties, says car wrecks are not just an issue in Prague. “This is a problem affecting many Czech cities and villages and has been overlooked by the Ministry of Transport for a long time.” 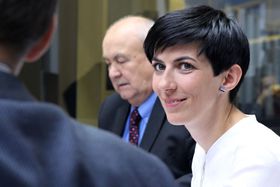 Markéta Pekarová Adamová, photo: Luboš Vedral / Czech Radio Along with her party colleagues, Pekarová Adamová is one of the initiators of a new law amendment that is expected to be discussed in Parliament on Wednesday. The proposal seeks to make removing wrecks easier by introducing legislation that would make cars eligible for removal three months after failing their technical inspection. If the owner doesn’t then move their vehicle within two months, the respective authority would be allowed to move the car to a specified parking area and, if no further communication from the owner arrives, could destroy the vehicle.

However, the proposal has met with disapproval from the Ministry of Transport, which recommended the government vote against the amendment. In a statement published two weeks ago it criticised, among other things, the amendment’s legislative technical deficiencies and that instead of immediately destroying such vehicles, they should be considered for sale first.

The lower house of parliament has approved a new legislation amendment, which would make it easier for district authorities to remove…

Referred to as a key document, the government’s National Investment Plan has been years in the making. On Monday, the long awaited…