Air traffic above the Czech Republic is getting heavier and heavier, a fact reflected in the results of the company Air Navigation Services, the news website iDnes.cz reported. The biggest players remain Lufthansa and Emirates, though their share is declining as low-cost airlines account for more and more of the flights through Czech airspace. 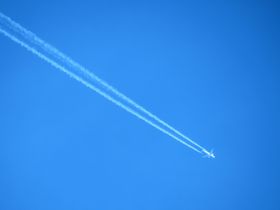 Its annual report states that the company achieved a net profit of CZK 383 million with total sales of CZK 4 billion. This far exceeded Air Navigation Services’ plans for 2016, it said.

The Ministry of Transport, which established the firm, received payment of CZK 129 million from it last year. It will collect the same sum for the current 12-month period.

However, despite record air traffic and revenues Air Navigation Services did not achieve its greatest ever profit in 2016. That occurred three years previously, when it earned CZK 406 million after tax.

The number of movements in Czech airspace exceeded 800,000 per year for the first time in 2016, reaching 836,000. That was a year-on-year ascent of 7 percent, one of the highest growth rates in Europe. July was, as per usual, the biggest single month of the year.

Air traffic above the Czech Republic has doubled in the last 12 years, according to Jan Klas, managing director of Air Navigation Services.

In terms of passenger numbers, over 130 million people flew across the Czech Republic in 2016.

Most of Air Navigation Services outgoings are on salaries. The company has a staff of almost 950 and the average wage cost per employee climbed to CZK 147,000 a month last year. It has long been one of the Czech Republic’s highest paying firms.

The greatest source of revenues for the domestic flight management company is still Lufthansa, though its share fell once again. In 2013 the German carrier accounted for 10 percent of total volume; last year that number was down to 7.8 percent.

The second biggest flyer over Czech territory is Emirates, but it too accounts for a lower share than previously.