There is a sufficient quantity of food reserves in the Czech Republic, with food processors having prepared plans and supply routes secured, according to the Ministry of Agriculture. Prime Minister Andrej Babiš has asked Czechs to stop panic buying in light of the COVID-19 pandemic, with the Agriculture Ministry stressing that people do not need to horde food. However, in some goods, such as pork, self-sufficiency is not present, the Czech News Agency reports. 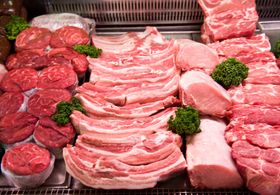 Photo: Filip Jandourek / Czech Radio Bakeries are self-sufficient and can operate independently in case of problems, Agriculture Minister Miroslav Toman said on Friday. What is most important right now, according to Mr Toman, is to ensure that relevant food processing sectors receive the necessary disinfectants, protective equipment, as well as financial support, so that any potential risk is negated.

He finished his address by saying that he hopes people will realise during this period how important domestic agriculture is and that the strategic sector needs to be supported.

The head of the Federation of the Food and Drink Industries of the Czech Republic Dana Večeřová was also calm, telling the Czech News Agency that most related businesses do not just have a crisis plan in place but also security standards during food production, which include directions on how to proceed in case the viral infection at production stations. The procedure is similar as with other infectious diseases.

The head of the food and drinks industries federation went on to say that while some of the current government measures could impact small and medium sized food producers in the country, who will not be able to sell their products at markets, she stressed that most of these events begin in April and May. Therefore, it is too early to make conclusions on the level of impact, she said.

The Czech Republic produces more than 2.7 million kilograms of flour, 270 tons of beef, around 6.5 million eggs and more than 8,000 tons of milk, the Czech News Agency writes.

According to the Health Ministry, the country was self-sufficient in beef production last year, reaching a surplus of more than 23 percent. However, when it came to poultry, production lay at 67.6 percent of total consumption, eggs were at 86.6 percent and pork production lay just over 50 percent.