A direct flight line connecting Prague with Bangkok could be established by the end of 2019. The plan is the result of a meeting between a Czech delegation led by Prime Minister Andrej Babiš and representatives of Malaysian airline Air Asia, in Bangkok. If the plan goes ahead the prime minister believes it would help boost trade and tourism. 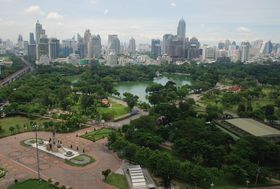 Bangkok, photo: Terence Ong, CC BY 2.5 Prime Minister Andrej Babiš is currently touring South Asia and looking to boost trade relations with local countries. One of his last actions in Thailand, where he spent a couple of days, included meeting with representatives of one of the world’s largest low-cost airlines Air Asia.

The airline is now expected to soon have a daily direct flight connection between Prague and Bangkok.

Mr. Babiš said that administrative details still have to be finalised and a representative of Air Asia is expected to visit Prague within the next few weeks.

According to the Czech News Agency around 43,000 Czechs visit Thailand every year, while the number of Thai passengers flying to the Czech Republic lies at around 50,000.

Air Asia is now looking for a partner that would provide connections for passengers arriving to Prague from Bangkok into other European destinations.

Due to Bangkok’s role as an important intersection for Air Asia flights, it is hoped that the flight connection to Prague could also bring in tourists from other Asian countries.

Such a move, the Czech prime minister hopes, could help boost trade and tourism in the Czech Republic. Industry and Trade Minister Marta Nováková says that special programs for Thai tourists should be organised and that the whole of the country, not just Prague, should be made attractive to visit.

Mr. Babiš said that he and his delegation have done the outmost to help Czech companies succeed in the Asian country, which many see as an increasingly important transport hub in Indochina. He also said he hopes that his Thai counterpart, Prayut Chan-o-cha, visits Prague soon.