The Czech Republic stands in line to land another major investment connected with the auto industry. German carmaker BMW is reported to be weighing up Czech locations for its future test centre for self drive vehicles. 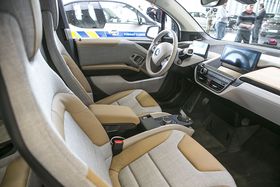 Illustrative photo: Filip Jandourek BMW’s intentions were unveiled by minister of finance Ivan Pilný in an interview with the Czech daily, Dnes. The paper said it received confirmation from other sources but neither BMW itself nor the Czech state agency for attracting foreign investment, CzechInvest, were willing to comment further.

Locations in the Ústí and Karlovy Vary regions, two of the regions with the highest unemployment rates and lowest wages in the country, are said to be tipped to get the new BMW centre. The government this month launched a multiannual programme to revive those two regions, along with the Moravia-Silesia region in the far east of the country, with one of the main aims to redirect them away from tradition industries which are already shedding jobs.

The model for the possible BMW investment is a deal with US-based aircraft manufacturer GE Aviation sealed this year which will make the Czech Republic the focus for its development of a new range of turbo-prop motors to be sold worldwide. GE said at the time that the investment decision had been decided regardless of the investment incentives being offered by Czech authorities.

BMW has announced plans to invest hundreds of millions of euros in two of the most promising future directions for automobile development: self driving cars and electric cars. The possible Czech test centre would be part of that.

Parallel moves by the Czech Ministry of Transport to create its own testing centre for self drive cars and the ambitions of several Czech towns, such as Ústi and Mladá Boleslav, to start examining how such vehicles could fit into their future urban plans are reported to dovetail with BMW’s own ambitions for its own test centre. The ministry is reported to be looking to take a decision regarding whether to build and where to site its test centre next year.

One factor in favour of a Czech location is said to be the country’s location in the middle between BMW’s main Munich headquarters and the Leipzig plant where production of electric cars is currently concentrated.

Much of the technology for self drive cars, such as sophisticated sensors and positioning devices, which make self drive cars a possibility are already in place.