Bankers raise forecast for growth of economy this year to 3.2 percent

The Czech Banking Association has raised its forecast for the growth of the Czech economy this year to 3.2 percent. Economists believe that household consumption will remain the main driver of the economy, which will also be boosted by strong foreign demand. 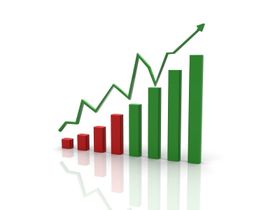 Photo: jscreationzs / FreeDigitalPhotos.net The Czech economy performed better than expected in the first three months of 2017 and a number of indicators suggest the trend should continue in the second quarter.

This has led the Czech Banking Association to revise upwards a prediction of a 2.6 percent expansion of gross domestic product made in April. The bankers are now saying the economy should grow by 3.2 percent this year.

By contrast, the association has left its previous forecast for 2018 – of 2.7 percent growth – in place.

The main force driving the Czech economy will continue to be household consumption, the chief economist at J&T Banka, Petr Sklenář, told the iHned.cz news website.

Mr. Sklenář pointed out that unemployment is nearing an all-time record low, while both salaries and household debt are growing.

Foreign demand, which boosts exports, will also prove beneficial, as will a gradual revival of investment activity, he said.

The improved forecast for growth this year is also important in view of the fact that last month statisticians refined their original data on GDP growth for the last two years, iHned.cz said.

This means that the benchmark for this year set by 2016 is actually higher than previously thought.

In its outlook the Czech Banking Association also warned that one of the strongest factors influencing the economy this year and next will be wage growth pressure.

Salaries are likely to grow by about 5.5 percent nominally this year and next. Inflation on average will reach 2.2 percent this year and 2.1 percent next year.

The Czech Banking Association’s chief economist, Eva Zamrazilová, said that the first interest rate increase would prove a test to the Czech crown. How the currency develops will depend on the timing and intensity of further hikes, she told the news website.

The Ministry of Finance and the Czech National Bank are just about to announce their own GDP forecasts. The latter will make its prediction next Thursday, when the central bank’s board could announce its first interest rate rise in nearly a decade, iHned.cz said.