Prime Minister Andrej Babiš says he plans to increase the salaries of teachers by 15 percent and those of non-teaching school employees by 10 percent. Speaking after talks with union chiefs, he said the raises should come in next year. 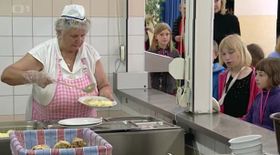 Photo: ČT On Friday morning government leader Andrej Babiš emerged from negotiations with the chairman of the schools trade union, František Dobšík, to confirm that teachers would receive 15 percent more in their pay packets. He described next January as a realistic implementation date.

Non-teaching staff at educational facilities, including janitors, cleaners and canteen workers, will get 10 more when the change comes in.

Mr. Dobšík told reporters that non-pedagogic school employees had long been undervalued and were almost the worst off of all public sector staff.

This view was echoed by another participant in Friday’s meeting, the minister of education, Robert Plaga, who referred to such workers’ pay as miserable.

Non-teaching staff had been in line to get a 6 percent pay rise under the government’s original plans but the schools unions had dug their heels in on the matter.

Mr. Babiš said there was not enough in the state coffers at present to award them the say pay rise as teachers. However, that gap will be narrowed next year, he pledged.

For his part Mr. Dobšík said that matters were headed in the right direction.

Last year half of the country’s school janitors received CZK 18,500 a month gross, compared to just under CZK 23,000 for half of school canteen heads.

Earlier Mr. Plaga had said his ministry would be seeking up to CZK 1.2 billion more from next year’s state budget.

The minister said on Thursday that up to CZK 800 million of that sum would go towards non-teaching staff.

When the teachers’ rises take effect they should get around CZK 36,000 gross a month, along with bonuses of up to CZK 9,000.

Teachers unions in the Czech Republic have declared a state of strike alert. The move follows a breakdown in salary talks with the… Study: Major wage gap between Czech teachers and other graduates

Despite the Czech school system maintaining a relatively strong position in international testing, the ratio of what the country’s…