The situation in the Moravian-Silesian region, including its town of Karviná, is stable and there is no reason to panic, Health Minister Adam Vojtěch said on Tuesday. The statement came a few days after several EU states placed the Czech Republic on their list of medium-risk countries due to the outbreak in the country’s north-east.

While the Czech Republic has handled the COVID-19 pandemic largely with success thus far, an outbreak in the north-eastern tip of the country around the mining town of Karvina continues to grow and has sparked worries both domestically and abroad.

The town and its surrounding areas have been responsible for 50 percent of new coronavirus cases in the Czech Republic over the past days, according to the head of the Institute of Health Information and Statistics. Furthermore, the 1.51 R rate, which refers to the average number of people that one infected person can expect to pass the coronavirus on to, means that the local spread has not yet been fully contained. Tomáš Petříček, photo: ČTK/Michal Krumphanzl In light of the outbreak, parts of Czech media have been speculating that it is a result of ministerial incompetence on the part of Health Minister Adam Vojtěch. An article in the news site Seznam.cz alleged that the wrong type of COVID-19 tests had been used on miners in the initial phase of largescale testing. OKD, the company which owns the local coal mine, announced on Saturday that it has suspended mining operations for six weeks after more than 20 percent of its workers tested positive.

Some saw Foreign Minister Tomáš Petříček’s response to a question about Karvina on Czech Radio last Sunday as a validation of concerns about how the situation had been handled.

“It is possible that we should have acted sooner in this case. Since this is a local problem we should be doing our best to keep it under control and prevent it from spreading.”

Mr Petříček has been busy smoothing things over with Slovenia, Cyprus and some Baltic states, who placed the Czech Republic on their list of COVID-19 medium-risk states last week, potentially complicating travel plans for Czech tourists.

To dispel concern, the health minister addressed ongoing worries in a special press conference on Tuesday, where he said that the situation has become politicised and urged the public to focus on the most recent data which shows that the number of new cases has been set on a downward trajectory.

“There is no reason to panic, to start saying that the epidemiological situation in the Czech Republic is fundamentally getting worse. The data clearly shows that we are returning to the trend of decreasing numbers of new cases over the past days. However, we cannot dismiss the possibility that a rise could occur again in the next few days, because the miners who tested negative will undergo another COVID-19 test.” 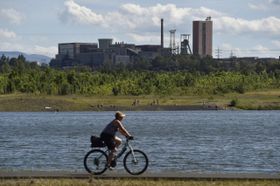 Karviná, photo: ČTK Last week new infections in the Czech Republic did come worryingly close to the peak numbers reached at the height of the pandemic in March. However, the data presented at the conference showed that the number of new cases has indeed gone down since the peak of 305 was reached last Monday, with Sunday’s 75 cases being the lowest in two weeks. Furthermore, health officials stressed that very few coronavirus patients have actually required hospitalisation and that the new cases were mainly registered among the families of the miners.

Slovenia has since placed the Czech Republic back on the list of low-risk countries, though Czech tourists arriving from the Moravian-Silesian region are still required to present a negative COVID-19 test or go into two-week quarantine upon entering the state. Meanwhile, negotiations to reach a similar deal are underway with Cyprus, Estonia and Latvia.