Among the recipients of the state awards handed out by President Miloš Zeman on October 28, was Karel Lánský – a legend of Czech Radio broadcasting. For eight dramatic days after the Soviet led-invasion of Czechoslovakia Lánský and his team kept independent Czechoslovak Radio on the airwaves, broadcasting from secret locations in Prague and running the operation from his flat close to the radio’s Vinohrady headquarters. 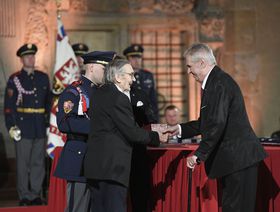 Karel Lánský, Miloš Zeman, photo: ČTK/Ondřej Deml Karel Lánský was clearly moved as he accepted the country’s highest state distinction –the Order of the White Lion- from the hands of the president. The 94-year-old veteran reporter says that the honour belongs not just to him but to the whole team of brave men and women who resisted the Warsaw pact forces in 1968 to bring people independent news coverage of what was happening in the country.

When the tanks rolled into Prague Lánský headed a team of radio reporters who were determined to keep independent broadcasts on the air for as long as possible. He says that the close-to-midnight phone call that brought him back to the radio building was a shock, despite the fact that –unbelievably – he got early warning about a possible invasion.

“My colleague Jirka Kmoch was stationed in Moscow at the time. And he warned us that a reporter from Soviet Radio had told him an invasion was being planned and could happen soon. Jirka said he didn’t believe it, and because I trusted Jirka’s judgement, I didn’t believe it either –that was my mistake.”

When Soviet soldiers forced their way into the building Lánský used both persuasion and threats to prevent them cutting off broadcasts.

“They wanted to cut off all our phone lines. And I told them look, the radio is the main source of information for all Prague citizens. If you stop the radio broadcasts then within two hours the place will be surrounded by thousands of people. At times of crisis Czechs have always looked to the radio and they will come to its defense even at the risk of getting shot at.”

Although broadcasts continued for some time from the main building at Vinohradská 12, Lánský says that on August 22 the Soviets sent in tougher commanders to deal with them and it was clear that they would uncompromisingly vacate the building of all but collaborators. 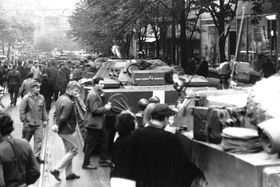 Warsaw pact troops on Vinohradská st., August 1968, photo: archive of Czech Radio At this point independent broadcasting continued from underground locations – a number of secret places in Prague – and Lánský coordinated the operation from his flat at Náměstí míru.

He says that in those fateful days everyone used whatever connections they had to resist the invaders.

“I was able to do something else – a childhood friend of mine was head of the Czechoslovak State Bank at the time. And as soon as I got that late night call about the invasion, I called him to tell him what was happening and give him the time needed to transport the money in cash that they had there to a secret location. When the Soviets tried to get their hands on it, it was too late. We were ahead of them.”

The independent radio broadcasts lasted for eight dramatic days and Karel Lánský says it was a heady and action-packed time.

“Those eight days were mine. Due to fate and our so-called Soviet “friends” I was placed in a position where I was literally in charge of Czechoslovak Radio broadcasts.”

Although Lánský is proud of what he and his colleagues achieved, he says the Soviet-led invasion was a huge shock and disappointment for someone who had trusted in the communist ideology and been a member of the party. He was thrown out of the party for criticizing it in 1961.

“I loved the notion of socialism, I came from a poor family, very poor, my mother died at the age of 48, my father left us and we kids had to fend for ourselves. It was rough. But all my hopes in the system were gradually dashed one by one and the invasion was the final drop. It was like D-day. Then I realized I was done with socialism forever.”

In 1970 –the start of the so-called “normalization” years Lánský, and others involved in the 1968 independent broadcasts, were forced to leave the radio.

“I handed in my notice, so they wouldn’t have the pleasure of throwing me out. I was warned that a written order was being prepared not to let me into the radio building, so I decided to take things into my own hands and leave. I got a job as a construction worker and frankly I did not feel ashamed of that. Better get paid for an honest day’s work than clowning around somewhere. And the team I worked with were great guys – eight out of ten of them had a university education and had been forced to leave their profession.” 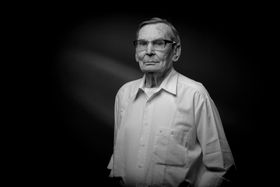 Looking back over the years Lánský says radio has always been the love of his life.

“Radio is – I don’t want to sound clichéd – but radio is everything to me. Strangely enough, despite my advanced age, I still have not had enough time to listen to everything I would like on the radio.”

Czech interest in African American culture goes back to the 19th century. When Antonín Dvořák spent three years in the United States…

In this programme, the eighth in our series mapping this country’s history through the radio archives, we start with the dramatic events…

Czechs and Germans in 1930s Czechoslovakia: a complex picture