A new film called The Trap, which is due to premiere on Czech Television this Sunday, tells the tragic fate of the great Czech film and theatre actress Jiřina Štepničková who fell into a trap set by the communist secret police in the 1950s and was sentenced to 15 years in jail for attempting to flee the country with her four-year-old son. The communist hysteria surrounding the process was so great that many of Štepničková’s colleague actors and actresses signed a petition for her to be put to death for treason. 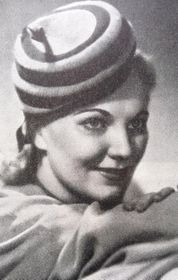 Jiřina Štepničková, photo: Public Domain When Jiřina Štepničková was born in 1912 it seemed that she was born under a lucky star. Good-looking, smart and talented, Jiřina dreamed of becoming a theater actress and followed her dream despite her father’s threat that he would disinherit her if she did. At the age of 17 the young Štepničková got her first role in the National Theatre and a year later she was invited to join the ensemble. At the age of 24 she chose to continue her career at Prague’s famous Vinohrady theatre where she was welcomed with open arms. Film producers soon discovered her talent for the silver screen and she starred or co-starred in more than 50 Czech films in her twenty-year career.

In addition to being smart, she was highly principled. During the war, when offers came for her to star in German movies she refused point blank. After the war she went on a study stay to London where her only son, Jiri, was born. He was the son of academic painter Jan Samec, but his parents never married and soon broke up. Proud and independent, Štepničková returned to Czechoslovakia in 1948 where she planned to bring up her son as a single mother.

As she had never bowed to the Nazis, she stood tall and principled before the communists. She repeatedly refused offers to appear in communist movies and enraged the communist authorities when she said a prayer for Czechoslovakia on stage during one of her theatre performances. The communist secret service decided to set a trap for her; she was to serve as an example to those who thought to defy the regime.

They wrote a fake letter from Frantisek Cap, a producer she had worked with and trusted, inviting her to flee to West Germany where he would cast her in one of his films. The letter said a smuggler would help her cross the border. Štepničková, who no longer saw a life for herself and her son in communist Czechoslovakia, took a leap of faith.

It was a tragic decision. The smuggler disappeared close to the border and Štepničková and her four-year-old-son were surrounded by communist border guards. She was thrown in jail and her son was placed in an orphanage. 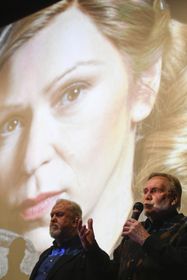 Viktor Polesný, Jiří Štěpnička, photo: ČTK/Michal Kamaryt The 1951 show trial was reminiscent of others of the time, like those with Milada Horáková or Rudolf Slánský. The communist hysteria surrounding it was such that many of Štepničková’ s colleague actors and actresses from her beloved Vinohrady theatre signed a petition for her to be put to death for treason. The trial was over in two days and Štepničková was given a fifteen year sentence. It later emerged she was one of the victims of a communist plan called General Prevention.

Pleas to then-president Antonin Zápotocký for her to be granted pardon from film director Martin Frič, the animated movie artist Jiří Trnka and others proved fruitless. Štepničková was released from the communist jailhouse jail ten years later, just two months ahead of a presidential amnesty in 1960. Only one of the former colleagues who called for her to be put to death had the courage to face her and apologize.

The film telling her tragic story is based on a biographical book of the same name, but the film’s director Viktor Polesný says the biggest inspiration came from many hour long meetings with Štepničková’s son Jiri who gave him a personal account of the tragedy as seen through the eyes of a four -year-old and later a child branded as the son of a traitor.

Jan Sokol – Part 1: It would be an exaggeration to say the StB killed Jan Patočka

Philosopher Jan Sokol was an MP in the early 1990s, served as Czech education minister and lost in the final round of voting for president…

The Czech government’s Commissioner for Human Rights Helena Válková (ANO) is under pressure after the news site Info.cz accused her…

Adéla and Petr Mucha on Christianity, Christmas and the Underground Church under Communism

Thirty years ago this Christmas, Czechs were in an especially festive spirit – the entire Communist Party leadership had resigned a…