Czech schools forced to lock their doors because of the coronavirus crisis will reopen in mid-May at the very earliest, the minister of education said on Monday. Plans are in place to make sure the usual round of end-of-year exams go ahead in some form. However, the current term will not be extended into the usual holiday period. 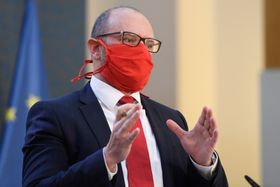 If government measures are dropped by then and schools reopen, school leaving (“maturita”) examinations and year-end tests for younger students would be carried out 21days after the resumption of teaching, the minister said.

The school leaving tests would be carried out in simplified form but would still be comparable to those familiar from other years, the ANO appointee said.

A unified “maturita” exam should take place within the common part of written tests in Czech language and literature and in mathematics.

The marking of tests will be accelerated so that would-be third level students can discover how they have fared as quickly as possible, the minister said.

However, if schools only reopen following the start of June such exams would not take place at all and results would be calculated instead on the basis of student’s performances in previous years.

Entrance exams for children applying to secondary schools could be held two weeks after the resumption of teaching, Mr. Plaga also told reporters.

There would be just one such test, with the date to be set by the Ministry of Education.

The tests should be held soon as children have been preparing for them for a long time, the minister said.

Mr. Plaga said he was aware that the current situation was stressful for pupils, parents and educators and that his officials had considered all alternatives when weighing up how to proceed with the current academic year.

However, shortening the traditional July and August summer holidays was never on the table, he said.

The education chief is now putting his proposals forward to the rest of the cabinet. Photo: Filip Jandourek / Czech Radio If the government approves the relevant, MPs could discuss it at an extraordinary “legislative emergency” session on Tuesday.

Minister Plaga said he did not want to speculate as to how the government measures would impact the quality of education or examinations.

Czech schools shut their doors indefinitely on March 11 in one of the cabinet’s first major moves to contain the spread of the Covid-19 disease.

Some 1.7 million pupils and students are now studying at home, including in the form of online classes.

The Czech Ministry of Health says the freeze on attending schools will be one of the final measures to be dropped once the situation surrounding the coronavirus begins to improve.