Ski resorts around the Czech Republic are witnessing one of the worst snow seasons on record, and according to long-term predictions by Czech climate experts, we can expect even less snow in the future. While the skiing season in the country’s mountains will be considerably shorter, white winters in the low-lying parts of the Czech Republic will soon become a distant memory. 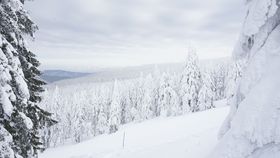 Photo: Luděk Brhel The Czech Republic is currently witnessing one of the mildest winters on record, with temperatures in the past weeks reaching well above the ten degrees Celsius mark. While last January, the country’s mountains had more than two metres of natural snow, this year, the snow cover only reached one metre last week and according to the weather forecast, it is unlikely to last for long.

The last really cold winter was recorded in the Czech Republic in 2006. However, it was followed by one of the warmest winters in the history of measuring. The winter seasons in 2014, 2015 and 2016 were also unusually warm.

According to experts, such mild winters are not just a matter of temperature fluctuation. The gradual decrease of snow is a long-term trend that will continue into the future.

Pavel Zahradníček of the Global Change Research Institute of the Czech Academy of Sciences says the winter season best reflects the impacts of the global climate change.

“Winters are becoming shorter, while the vegetation period is getting longer. What changes is the character of precipitation is also changing. As the atmosphere gets warmer, there is less snowfall in winter and more rain.”

According to Mr. Zahradníček, the number of days in the mountains with traditional winter weather has dropped over the past 20 years by about 35 percent.

At the moment, the highest peaks of Krkonoše, the Czech Republic’s highest mountains, remain covered with at least 10 centimetres of snow for an average of 120 days. Over the next two decades, that period is expected to shorten by 25 days.

The duration of the snow cover in the lowlands, which currently lasts for an average of 24 days, will drop by two thirds to around seven or eight days.

“The climate models don’t tell us that we won’t be snow or that we won’t ever see snowdrifts again. There will be cold years and years with plenty of snow, but they will be much less common. And lowlands will be most affected by this change.”

While the lack of snow in the mountains mostly affects ski lift operators and hotel owners, in the lowlands, it mainly hits farmers and their harvest.

A sufficient snow cover in winter is crucial for replenishing the country’s underground water resources and keeping moisture in the soil, but it also protects budding crops against spring frost.

In South Moravia, the risk of damage to fruit by spring frost is expected to grow from 25 to 60 percent over the next two decades.

Czechs are buying up property in the country’s mountain regions, with special interest being placed on historic log-houses and flats…