When it comes to gender equality, Brussels is getting better, but not fast enough, Politico says in reference to its annual list of most influential women in the EU. A record number of women were elected to the European Parliament in 2019, bringing their representation closer to the 40 percent mark. Certainly not equal, but an improvement, the news site notes, hailing the fact that the European Commission is now led by a woman, Ursula von der Leyen, who, it says has almost managed to achieve a gender-balanced College of Commissioners. 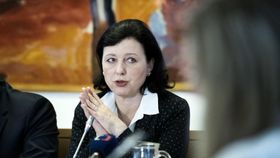 Věra Jourová, photo: Michaela Danelová / Czech Radio Among the movers and shakers in Brussels is the Czech Vice President of the European Commission for Values and Transparency Věra Jourová (born in 1964) who is responsible for upholding rule of law in the European Union. In the previous European Commission (2014 to 2019) she served as the Commissioner for Justice, Consumers and Gender Equality, getting high marks for her performance. In appreciation of her role in passing and implementing the General Data Protection Regulation Time magazine put Jourova on its 2019 list of 100 most influential people in the world.

Dita Charanzová (born in 1975), an MEP from the ruling ANO party, is a Czech politician and diplomat who has served as an MEP since 2014. She is featured 16th in the Politico ranking. Charanzová is seen as having a "lead role in technology issues" in the European Parliament. This is at a time when the promotion of digitization and new technologies is becoming one of the key issues of the present-day, Politico says.

According to Politico, the most influential woman in the EU is Ursula von der Leyen, President of the European Commission, followed by Danish Commission Vice-President Margrethe Vestager, who is responsible for competition. Others on the “top 20 women” list include the European Central Bank's chief Christine Lagarde, high-ranking women in large consulting firms such as BCW or leading figures in environmental organizations such as ClientEarth.

"Gender equality in Brussels is definitely improving, though we are not there yet, " Politico says. The news site published its ranking to coincide with International Women's Day on March 8th.

What is the position of Czech women on the labour market? How big a slice of the female population is employed and what is their share…

What chance a first female Czech prime minister or president?

Women in this part of the world have had the right to vote since the first Czechoslovak Constitution was approved a century ago. However,…