Škoda has announced the name of its first electric SUV. The latest Škoda model, which is still in development and should hit the market in 2022, has been named Enyaq. The name starts with the letter E symbolizing electromobility and ends with Q, which the brand uses in the names of all its SUV models. The name is derived from the Irish word enya meaning "source of life." Enyaq is the latest in a series of Škoda SUV models, following up on Kodiaq, Karoq and Kamiq. 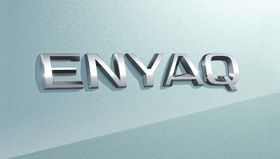 Photo: Škoda Auto The Enyaq is the first Škoda SUV model to be developed as an electric car from the outset, Alain Favey, Škoda sales and marketing director told journalists at a press briefing in Prague on Thursday. He said Škoda wants to bring eMobility to the broadest possible clientele from the outset and the segment A cars to which Škoda Enyaq belongs hold the largest market share in Europe. SUVs are increasingly popular among customers and the trend is expected to continue in the next decade.

Built on Volkswagen Group’s MEB chassis platform, Škoda's first mass-produced electric SUV is to be powered by twin electric motors outputting 302 horsepower with a WLTP-estimated range of 310 miles from an 83kWh battery pack. Škoda is expected to offer the Enyaq with three battery-pack sizes.

Škoda plans to produce five electric models across different segments by 2025, starting with the Enyaq. By that time, the brand expects pure EVs and plug-in hybrids to represent 25% of its sales.

Last year Škoda Auto produced more than 900,000 cars in its Czech factories. Year-on-year, its domestic production increased by 2.25 percent to 910 thousand vehicles. Worldwide, its deliveries dropped by 0.9 percent to 1.24 million, mainly due to a drop in demand on Chinese and Indian markets.

Škoda has three production plants in the Czech Republic. The main one is in Mladá Boleslav, which produced 590,000 cars last year, almost half of which were Octavia models. The car manufacturer in Boleslav produces the Fabia, Scala, Kamiq and Karoq models. Škoda Kvasiny produces large Kodiaq SUVs, Karoq compact SUVs and Hybrid Superb and Superb iV models. The Vrchlabí plant specializes in the production of components.