Essayist, educator and debut novelist René Georg Vasicek was conceived in communist-era Czechoslovakia, born in Austria a year after the Soviet-led invasion of his parents’ homeland, and raised in the pine barrens of eastern Long Island, New York. His novel The Defectors is a self-described book of odd and uncanny episodes about people, many of them Czechs, trying not just to escape reality but “defect” from it. 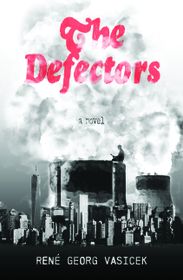 The Defectors begins in the voice of an unlikely narrator: an articulate, rather philosophical Prague agent of the dreaded communist-era secret police (StB) named Zigmund Hrbaty. He is obsessed with a political dissident and banned writer named Vera Musilova, whom he was tasked to keep under surveillance, but became his mistress and collaborator.

Zigmund writes in a report to the StB sometime after receiving a postcard from New York City from Vera, who defected on 6 March 1986:

‘The surveillance of political dissident and writer Vera Musilova (Operation Cigarette, 1974-present) has occupied me for the last twelve years. Her detective novel Smoker Drinker Thinker is strangely popular in the West.

‘A signatory of Charter 77, Vera Musilova is an officially prohibited writer in Czechoslovakia. Nevertheless, it is easier to get a samizdat edition of Smoker Drinker Thinker from a hashish-eating hooligan in the underground than it is to get a roll of toilet paper at the grocery store. I have read the novel thirteen times.’

‘As you might expect, there are a number of similarities between the author and her protagonist, Detective Dasha Popelnikova. They are both divorced and in their late thirties. They both smoke Sparta cigarettes. They both drink Frankovka red wine. And so forth.

‘There are the predictable differences too: Vera is a blonde; Dasha is a brunette. Vera reads Husserl; Dasha is a disciple of Heidegger. Vera prefers to be on top; Dasha likes it from behind. Here we must be careful. Detective Dasha Popelnikova is not an alter-ego of Vera Musilova. The truth is more elusive. She is what German philosophers might call Die Unselbst, ‘the Unself’.”

Memoirs, alter-egos and the Unself

Zigmund Hrbaty – whose surname translates into English as “hunchbacked” – is the name of a character who has appeared in the odd story by René Georg Vasicek for over a decade now. But he is not a recurring character, exactly. Neither is Zigmund the writer’s own alter-ego, really, just as Detective Popelnikova – whose surname translates as “ashtray”, is more of an Unself for Vera Musilova.

In a phone interview earlier this week, I began by asking the New York-based writer about his relationship, so to speak, with the Zigmund character, what was behind his choice of names, and why he has moved away from creative nonfiction. René Georg Vasicek, photo: Maki Hirose I noticed from your earlier work, that you’ve been attached to the name Zigmund Hrbaty for quite a few years. What’s behind that?

“I have to go back in time a little bit and say that when I went to graduate school, I went specifically for what at that time was called ‘creative nonfiction – I always kept a journal-keeper, especially in college, and a composition notebook. So that first-person voice, and quite personal, quite intimate, was very natural for me. I’d done it a long time.

“In graduate school, part of me started to move away from memoir. I always liked fiction, and at some point I needed to create a kind of alter-ego. I felt that I could get to some other kinds of truths; that if I used an alter-ego, anything was possible. There was more freedom in that.

“But you’ll also see in the book [The Defectors] that they come sometimes as a third-person characters as well. So that’s my way of playing around with an alter-ego, but I want to say it’s beyond that – the German word Unselbst, an Unself – everything that’s not the self. And here I get a little bit into Buddhism. For me as a writer, it’s kind of an exploration.”

You mentioned moving away from the memoir format to fiction in essence to get to some greater truths, and so having a need for an ‘alter-ego’ – which of course also the narrator of you new book is describing this Vera Musilova, who shares a lot in common with her fictional character – Dasha Popelnikova, “Ms Ashtray”.

“One thing I have to say about the names is when I was choosing them, it was super fun for me thinking of the American reader’s, who wouldn’t know. But then I keep thinking if this were ever translated into Czech, it would probably read beyond silly – which would be fine, you know – but on the flip side, it would probably collapse under absurdity.”

Czechoslovakia: ‘this mythical land of my father’s stories’ 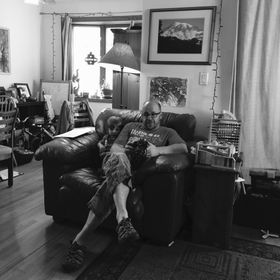 René and son Rafa in Astoria, Queens, photo: archive of René Georg Vasicek René Georg Vasicek grew up in New York and first visited Czechoslovakia – “this mythical land of my father’s stories” – in 1978, at the age of eight. He would visit relatives in southern Moravia every other summer or so throughout his teenage years, and also got to know Czech and Slovak émigrés while working for his father, an experience relayed in his essay Notes from a Czechoslovakian Machine Shop:

‘‘I want to be a machine,’ Andy Warhol famously declared. Personally, I never wanted to be a machine. But God damn if I didn’t feel like one when I was seventeen and turning steel on a lathe in my father’s machine shop on Long Island. ‘Piecework’ is what my dad called it, although by the time the words got through his crooked yellow teeth and harsh Czech accent, it sounded like “pisswork” – the mindless creation of thousands of identical metal parts.’

After earning his B.A. in English in the States, a couple years after the Velvet Revolution, Vasicek moved to Prague for a gap year – before going to law school. No prizes for guessing that things didn’t quite go according to plan for the aspiring writer, as Vasicek he recalled in an essay entitled ‘Get a Grip’, selected as a Notable Essay in the 2010 volume of The Best American Essays, edited by Christopher Hitchens:

‘I was shelving books at Shakespeare & Company Booksellers in New York City when I failed the State Bar Exam for the third time. The paparazzi did not stalk me like they did when John F. Kennedy, Jr. failed the bar exam. But I did have to tell my Czech immigrant parents, my live-in girlfriend, my close friends, and eventually even myself. What I told myself was this: It’s no big deal, I never wanted to be a lawyer anyway.’ René in Prague in 1991, photo: Rachel Lovinger That was in 1996. Not long after, both he and his wife decided to quit their jobs and get MFAs in writing. Vasicek says – half-jokingly – that he has ever since been drawn to writers of a similar background – those who abandoned the law.

“We applied to different places. She went to Columbia and I went to Sarah Lawrence College, and there I started taking writing more seriously – but of course in retrospect, even that sounds funny! What does it mean? Even in college, I was an English major and had taken some creative writing courses. There have been so many waves of transformations. And it still continues.

“I have a very strange relationship to the law. I always like finding writers who had some law school experience – Kafka or Bohumil Hrabal, Goethe I think studied law. In some weird way, I attempted to be that – someone who’s turned away. And yet there are things I still find interesting about the law. It’s a part of me.”

From 1997 to 1999, Vasicek worked for the Czech cultural centre in New York, mainly doing translations and helping visiting Czech authors, artists, former dissidents, filmmakers and the like during their stay in the Big Apple. There, his legal and literary background led to some epiphanies, elements of which arise in The Defectors.

“We had artists coming in and out, giving lectures. One I specifically remember was Miloš Forman’s screening for his film Černý Petr. There was a Q&A session afterwards, and he said that when growing up, ‘People spoke one truth at home, and one truth in public’. I felt even though we were outside that system, we continued that in our home.

“And there are always multiple truths. Once in a while you’d hear super complicated stories where some paperwork would be found and it seemed like they may have collaborated with the Secret Police.

“I think it was Václav Havel who said it’s very difficult to judge the actions of individuals who in certain circumstances may have done something to help their family – and, also, if what the agents wrote in was so inaccurate.

“Who knows if what the agent wrote is actually what happened. So that aspect is really interesting to me – especially from a legal aspect. What is real ‘evidence’ of anything? It gets really complicated when looking at those [StB] files.”

Vasicek’s need to connect with and explore Czech culture, he says, has “ebbed and flowed” over the years, but his fascination with concepts of self, shifting identities, memory and truth are a constant.

His book The Defectors is steeped in such concepts and grows ever more experimental as it progresses. Among the characters traversing the baker’s dozen of episodes in the book, he says, are some “quantum beings” – the Prague secret police agent Zigmund Hrbaty chief among them.

René Georg Vasicek teaches composition and creative writing in the Bronx and Manhattan and is a regular contributor to literary magazines and reviews. His debut novel The Defectors is available from J. New Books www.jnewbooks.com

Hrbaty also appears as a Buddhist psychotherapist who travels around Amerika [the author’s spelling] offering the “talking cure” in a Volkswagen Beetle. Then there’s an adjunct professor (like Vasicek) in Russian émigré Brooklyn (not unlike Vasicek) who quits his job to build a Golem made of stainless steel.

“Ultimately, like particles in a supercollider, the episodes are smashed together and fly apart”, reads the publisher’s blurb for The Defectors, and “we get a brief glimpse of something new, some never-before-seen particle, a cosmic thought.”

Karel Čapek was a leading Czech interwar novelist, playwright and journalist and is perhaps most remembered for works of science fiction…

The Grandmother: the book that every Czech knows

The Grandmother by Božena Němcová is an iconic work in Czech literature. The novel about an idealized rural community in the early…

The Czech Books You Must Read

Kafka, Čapek, Kundera and Havel, these are all world renowned names, but what about all the others? How well are Czech authors actually…