By 1950, two years after the Communists seized control in the “Victorious February” coup, Czechoslovakia was in the grip of a Stalinist terror. The show trials staged there – aimed at intimidating and silencing opponents of the new regime – were the largest in Eastern Europe. Almost a quarter of a million people were convicted on trumped up charges, of whom 178 were executed for political crimes. Milada Horáková, a democratic politician in Masaryk’s First Republic and a resistance figure during the war who had been imprisoned by the Nazis in the Terezín concentration camp, was the sole female political prisoner to be executed. 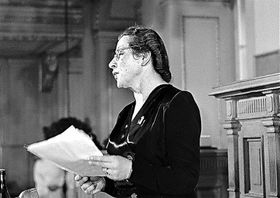 Milada Horáková, photo: National Film Archive in Prague Judge: “You have heard the indictment against you. Do you understand it?”

Judge: “Do you know what you have been found guilty of?”

Judge: “Do you feel guilty of the crimes listed in the indictment and of which you have been found guilty?”

Horáková: “I consider myself guilty of the crimes that I have confessed to, which are based on laws that are valid today and which have made my actions criminal.” 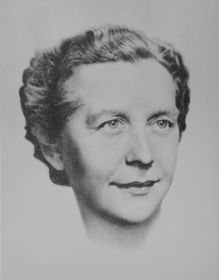 Milada Horáková, photo: Archive of Jana Kánská Judge: “And which the State Prosecutor considers to be the crimes of treason and espionage.”

Judge: “We shall come to that…”

Milada Horáková, a popular Social Democratic politician, was the only woman officially given a death sentence. She was hanged at dawn on 27 June 1950. To mark the 70th anniversary of her judicial murder, an audio collage of recordings from the trial are being transmitted in the Prague metro on Friday, as part of the civic initiative Milada 70: Murdered by Communists.

The daughter of a pencil factory owner, Horáková was born in Prague on Christmas Day 1901. At the age of 17, in the final year of the First World War, she was expelled from high school for taking part in an anti-war demonstration. Nonetheless, she went on to earn a law degree from Charles University, in 1926, the same year she joined a Democratic Socialist party (ČSNS). 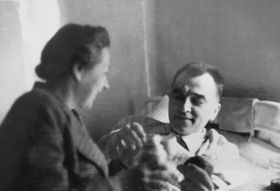 Milada Horáková with her husband Bohuslav, photo: Archive of Jana Kánská Horáková had been working in Prague’s social welfare department for a dozen years when the Second World War came, at which point she joined the underground anti-Nazi resistance. The Gestapo arrested her in 1940 and sent her to the Terezín concentration camp after brutal interrogation. Four years later, a German court sentenced her to 8 years for her political activity, although the Nazi prosecutor had sought the death penalty.

After the war, Horáková re-joined the ČSNS and served as an MP until resigning from Parliament after the Communist takeover in February 1948. The Czechoslovak secret police arrested her and fellow party members in September 1949, as prosecutors dispatched from Moscow began helping to prepare a case. 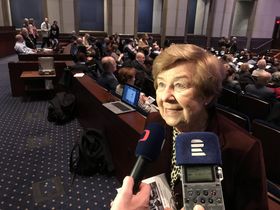 Jana Kánská, photo: Jan Kaliba, Czech Radio Horáková had one daughter, who was 16 years old at the time of her mother’s arrest and trial on bogus charges of treason and conspiracy. Jana Kánská spoke to Czech Radio ahead of the 70th anniversary of the judicial murder of her mother.

“Every untimely death hurts terribly and takes a long time to resolve. Seventy years is truly a long time, but some memories cannot be forgotten, and it is still difficult and painful at times…

“But one must accept it and embrace that missing person’s qualities. As for my mother, this means the immense honesty and bravery that she show during the entire trial, principles for which she eventually sacrificed her life.”

Each show trial had a script. After months of physical and psychological torture, the accused admitted to their guilt and agreed that their execution was a just punishment. Only Milada Horáková refused to play her role. In her final statement before the court, she said her conscience was utterly clear, as she had betrayed no-one, least of all herself: 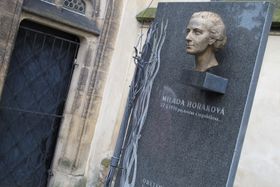 Photo: Kristýna Maková / Praha křížem krážem “What I did, I did consciously. I take full responsibility for my actions and that is why I will accept the punishment I will be given. I stated to the State Security authorities that I stand by my beliefs.”

The verdicts of treason and espionage were annulled in 1968, during the time of the Prague Spring reforms. But it was not until after the Velvet Revolution that Milada Horáková was fully, officially rehabilitated. In 1991 she was awarded the Order of Tomáš Garrigue Masaryk (1st Class). The 27th of June, the day of her execution, was declared "Commemoration Day for the Victims of the Communist Regime" in the Czech Republic. 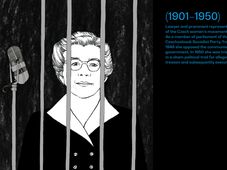 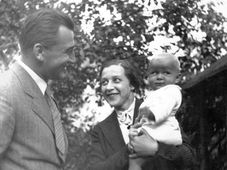 In the first of this series we heard the voice of Czechoslovakia’s first President, Tomáš Garrigue Masaryk. His wife Charlotte was…